When you’re new to something, there’s a always strange terminology to get your head around. Here’s a simple primer for anyone searching for a SUP and feeling a little confused by all the fancy words.

Rocker: On flat water, you need a board that’s either flat bottomed or slightly v-shaped to keep you gliding without too much effort. If you want to ride your SUP in a decent surf, however, you need rocker.

Rocker refers to any slightly convex shape under the board that provides lift to the nose and/or tail. A board with no rocker sliding down the face of a wave will just dig in at the bottom and throw you off. With some lift in the nose however – rocker – you can keep your nose up and make the turn. A board with rocker needs more energy to get it onto a wave, because the shape offers more resistance, but has much more manoeuverability once you’re on it.

Tail rocker helps by literally providing a kick in the tail when the board and the wave meet on an angle – once again improving manoeuverability. 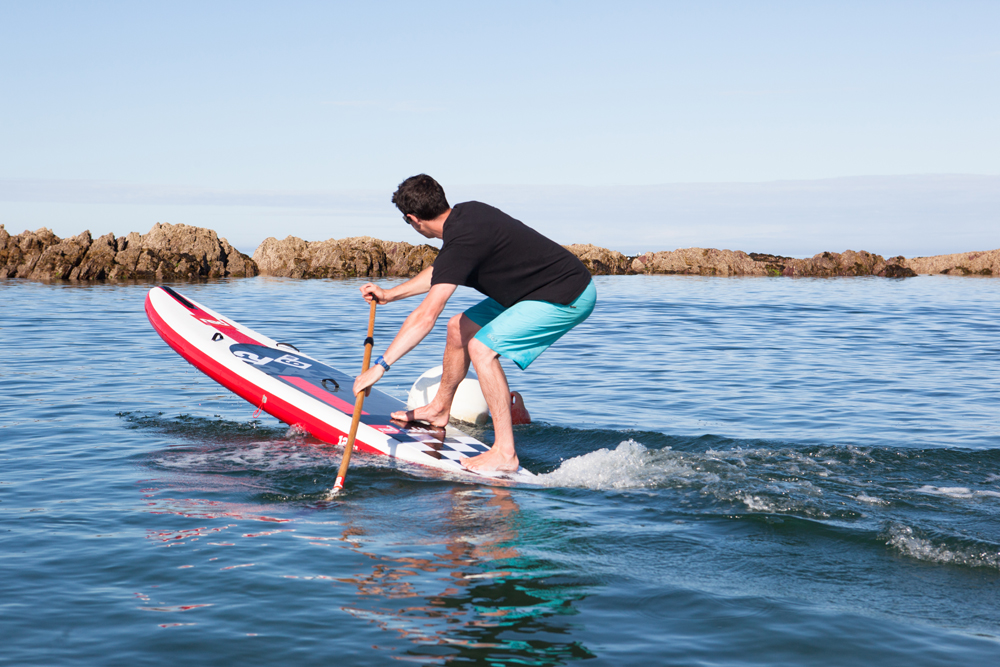 Volume: The volume of a board is – as it sounds – just how much space it takes up in the world. The higher the volume, the more buoyant the board so it will be easier to paddle, but harder to manoeuver. Because of this, surf SUPs generally have lower volume than cruising SUPs.

Planning vs Displacement: A planning hull gets more efficient the faster it goes because it rises out of the water, reducing surface contact between board and water. That makes it great for surf SUPs, where you have wave velocity to boost your speed. For flat water, however, a displacement hull is faster because it cuts through the water.

Fin set-up: A general all-rounder SUP will have a large, central, single fin. Cross-over boards however, that can handle flat water and surf, require you to think about multiple fin configurations. A surf SUP, where you’ll want to ride the rail, means you need the extra grip of additional fins. The most common set ups are thrusters (three fins), or quads, with four fins.

The SUP Board that will out last you.

Things to know before buying an inflatable paddle board

5 reasons why you shouldn’t save SUP till summer.